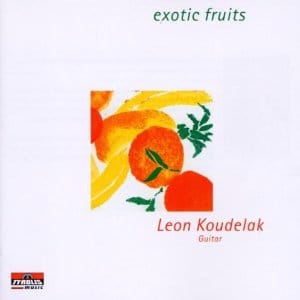 
==History==
​
It had been five years since Koudelak's last album ''Pavana Triste'' was released. The recording of a new album was delayed several times as Koudelak suffered from pain in the fingers of his left hand. After completely recovering, he made a concert tour of Asia and later recorded the CD ''Exotic Fruits'' in December 2001 at RS Promotion in[Bangkok.

The Master recording went to Tyrolis Studios to be remastered and released under the label Tyrolis Music.

The name "Exotic Fruits" describes the pieces on the CD as well the place where it was recorded.
Music from Cuba, Mexico, Turkey, Spain and Koudelak's own transcription of rock ballads are on this album. The title of the album is intended to describe exceptional pieces of music.
The piece "In Memoriam" is dedicated to his father Bohumil Koudelak, who died in July 2001.

The studio album "Exotic Fruits" is a live recording in front of an invited audience. Koudelak recorded the tapes
within two and a half hours. It was recorded directly on a MiniDisc Recorder MD-81, using [[Røde Microphones]], so further editing not possible.
It was described the CD of the year by the French technical periodical " Les Cahiers de la Guitar".