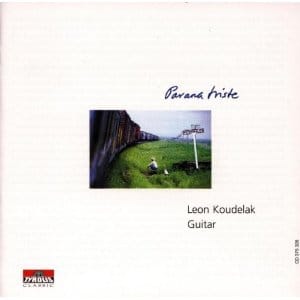 The album is dedicated to the Austrian guitarist Dietmar Tiefenthaler. During the summer of 1996 Koudelak and Konrad Ragossnig worked on a new arrangement of Antonio José's sonata for guitar, as the Edizioni Musicali Bèrben edition which doesn't correspond in many parts with the facsimile. While working on the arrangement, Koudelak received news that his friend and guitar duo partner, Dietmar Tiefenthaler died in a car accident. This changed the concept for the CD which had originally been planned to contain only 20th Century guitarsonatas. Koudelak recorded his friend's favorite pieces. The cover shows a farmer waiting for a passing train in Mexico, where Tiefenthaler spent most of his life.
A French thread  created with Dionisio Aguado who spent many years in Paris, one of his most representative piece is the RONDO Op. 2, Nr.2. Antonio José was a student of the French composer Maurice Ravel in Paris. His Sonata for Guitar is influenced by Ravel's "PAVANE POUR UNE INFANTE DEFUNTE" so the name of the third movement of the Sonata "Pavana Triste". Actually "Pavana Triste" was written by Antonio José some years earlier as a separate piece and later add in the Sonata. Leo Brouwer was in Paris when he wrote the piece "UN DIA DE NOVIEMBRE" and finally Roland Dyens as well a French composer, try to combine in the "LIBBRA SONATINA" Classic with Jazz and South American tunes in his composition. The last piece : Leon Koudelak wrote " ADIOS AMIGO" in memoriam to his friend Dietmar Tiefenthaler.

The recording was made at Tyrolis Studio in Eschen (FL) with digital recording equipment. The Sound engineer, Kurt Keckeis, used Georg Neumann microphones, which made the sound different from the previous recordings. Koudelak used this time not his Jose Luis Romanillos Guitar but a Masaru Kohno "Maestro". In general, the sound came out softer and warmer than the two previous CD. The accompanying booklet and the design is by Arno Oehri. The booklet include a 12-page documentation about the composers, the pieces and rare pictures.